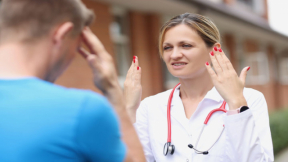 Moral Courage in Healthcare: What Are We Teaching Next Gen CRNAs?